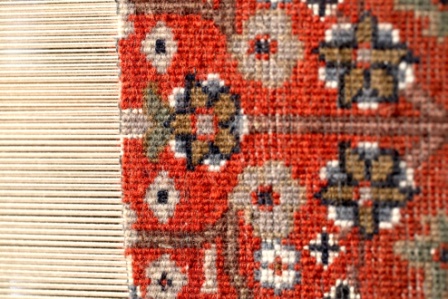 turkey’s carpet exports to the U.S. have doubled in the past five years and exceeded $464 million in 2017.According to the International Trade Center (ITC), Turkey, the world’s second-largest carpet exporter after China, sold carpets worth $2.2 billion last year.The U.S. was the biggest destination for Turkish carpets from 2013 onward, with exports to the country hitting $464.1 million, up from $220.5 million in 2013.

The U.S. was followed by Saudi Arabia at $311.2 million, Iraq at $181.5 million and Germany at $115.1 million. The chairman of the Carpet Sector Council at the Turkish Exporters’ Assembly (TİM), Salahattin Kaplan, said that previously the Middle East and Central Asian Turkic republics were the main destinations for Turkish carpets because those markets were easily accessible.

However, due to the unrest and conflicts in the Middle East, the focus shifted to the U.S. Kaplan added that the U.S. has certain criteria for importing carpets and the products are subjected to thorough inspections, and Turkish exporters have successfully passed these tests.He said there is a growing demand for Turkish carpets in the U.S. because of their good quality. Kaplan said that antique-style carpets are preferred in the U.S. from among the exported products.Fahrettin Kaplan, chairman of the leading Turkish carpet company Sanat Halı and Elexus Halı, said the U.S. is one of their most important customers.

The company is ranked third among the top-1,000 Turkish carpet exporters. Kaplan said that more than 57.5 percent of their total exports go to the U.S. “There is more than one reason why Turkish carpets are preferred. The variety of patterns, designs and the richness of color combined with quality workmanship make Turkish carpets very popular. Price competitiveness is another important reason.”He said that American customers change carpets even more often than Turks and prefer products in grays and blues made from polypropylene, polyester and viscose yarn.

He added that in addition to the U.S., they export carpets to 62 countries including Saudi Arabia, Germany, Canada, Poland, Belgium, Morocco, Kazakhstan, Iran and Israel.

Kaplan cited that their total export volume was $101 million in 2017.”Having successfully completed the Turquality process, our company made quick investments with support from the government during the branding process. We have started to work to make Sanat Halı a global brand,” he said.