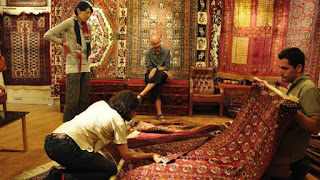 Iran says the channel to export its traditional hand-woven carpets to the United States is still open amid recent concerns in Tehran that Washington under a new leadership had already banned imports and re-exports of the precious Persian handicraft.
Iran’s IRNA news agency in a report quoted an unnamed official at the country’s Foreign Ministry as saying that Iranian merchants were still allowed to export their carpets to the US.
The official added that the US Treasury Department had not yet reversed an authorization to import Persian carpets that came into effect after the removal of sanctions against Iran in January 2016.
Earlier, Iran’s media quoted Razi Miri, the deputy head of the Iranian Carpet Exporters’ Association, as saying that the US had banned imports of Persian carpets as well as their re-exports to a third country.
In October 2016, Hamid Kargar, head of the Iran National Carpet Center, said that the exports of hand-woven carpets to the US had reached around $50 million since the removal of sanctions in January.
This followed earlier reports that the exports of the prized Persian carpets to the world’s largest consumer market were getting a boost from the lifting of the sanctions.
Iran shipped its first cargo of hand-woven carpets – globally considered the crown jewel of its handicrafts industry – to the US in February after the sanctions against the country were lifted.
The cargo was sent to Los Angeles from Hamburg.
In the US, Persian carpets are offered from $200,000 to $5,000 a piece depending on the type of the fabric, design and intricacy employed in their making.
There are almost 1 million carpet weavers in Iran, 700,000 of whom are working full-time.
Before the intensification of US-led sanctions against Iran in 2011, the country exported more than $600 million worth of carpets – mostly to the US – and had serious plans to raise it to $1 billion in the next year.
A nuclear accord that came into effect last January lifted the ban on exports of Iranian carpets to the US among other economic bans in return for Iran’s steps to restrict certain aspects of its nuclear energy activities.
report to -http://www.presstv.ir/Detail/2017/01/29/508255/Iran-says-channel-to-export-carpets-to-US-open

Iran’s prized rug trade is getting a boost from the lifting of sanctions, with exports to the US reclaiming the lost ground in a big way.
A stack of sanctions imposed in 2010 and then in 2012 pulled the rug from under the much-coveted Iranian carpet business, allowing cheaper craft from Pakistan, India and China to gain a foothold in the US and other key markets.
A nuclear accord reached in July has put Iran back on the market and the country’s elegant hand-knotted carpets have returned to their traditional destinations with a vengeance.
According to head of the Iranian National Carpet Center Hamid Kargar on Tuesday, Iran’s carpet exports to the US significantly grew in the four months since the beginning of the Persian year on March 21, totaling $27.6 million.
The figure compared with $80 million of Iranian carpet exports a year to the United States before the sanctions were imposed, bringing them to zero, the IRNA news agency quoted him as saying.
Kargar said Iran exported $83 million of carpets in total in the first quarter of its calendar year, a rise of about 40% year-on-year.
Iranian caviar, pistachios, saffron and carpets and US commercial aircraft and their parts are among the items allowed for limited business with the US.
Carpets are a major source of revenue for Iran’s $400 billion economy behind oil and gas and their derivatives, and pistachio nuts.
In 2011, the country exported more than $600 million worth of carpets and sought to raise it to $1 billion in the next year but intensified sanctions disrupted the plan.
In the United States, Persian carpets are offered from $200,000 to $5,000 a piece depending on the type of the fabric, design and intricacy employed in their making.
Those produced in India, Pakistan and China sell for about half the price of Persian carpets due to their lower quality, according to dealers.
In recent years, Iranian rug dealers have switched to the Asian market, catering especially to the growing crave in China and the UAE where many affluent families see exotic Persian carpets as a way of investment.

Iran’s carpet exports to US at $50mn

Iran says its exports of hand-woven carpets to the United States have reached around $50 million since the removal of sanctions in January.
Hamid Kargar, head of the Iran National Carpet Center, told Reuters that Iran was under pressure in the US market by rivals such as India, Pakistan and Turkey during the years that the sanctions were in place.
Kargar emphasized that the world’s largest buyer imported more than $80 million worth from Iran in 2010, before the trade embargo on the country was tightened.
He emphasized that a growth in exports of hand-woven carpets will have a positive impact on the lives of the carpet weavers in the country.
There are almost 1 million carpet weavers in Iran, 700,000 of whom are working full-time, Kargar said.
Between March and September this year, Iran exported $134 million worth of handmade carpets, or 2,330 tons, to 80 countries, Reuters said. That was a 17.7 percent increase in value and 10 percent rise in weight compared to a year earlier.
During the sanctions years, Iran partially compensated for its loss of market share in the United States and Europe by finding new buyers in Russia, China, South Africa and some Latin American countries, the report added. It still holds about 30 percent of the global trade in handmade carpets, Kargar further told Reuters.
Iran shipped its first cargo of hand-woven carpets – globally considered the crown jewel of its handicrafts industry – to the US in February after the sanctions against the country were lifted.
The cargo was sent to Los Angeles from Hamburg.
article published orignly
http://www.presstv.ir
Previous: Certification of Origin of Goods for European Union -dgft noitce
Next: Nepal Carpet exports drop 6.6 percent to Rs3.2b