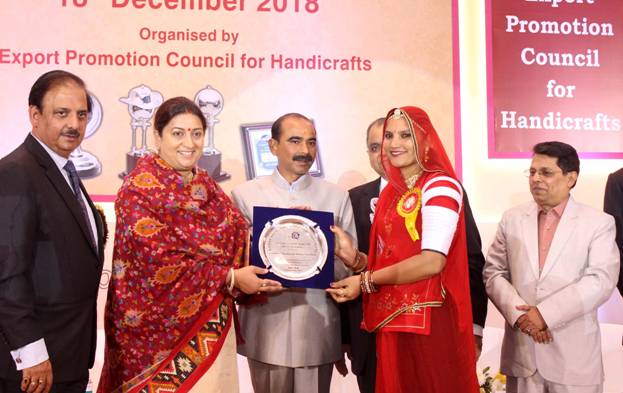 Union Minister of Textiles, SmritiZubinIrani, presented awardsto handicrafts exportersfor their outstanding performance in exports for the year 2015-16 and 2016-17 at a function at India Expo Centre & Mart in Greater Noida, Delhi NCR last evening. Minister of State for Textiles, Ajay Tamta and Development Commissioner [Handicrafts],Shantmanu, were also present on the occasion. The awards for outstanding performance of handicrafts exports were given under different categories to 136 exporters. 70 awards were given for the year 2015-16 and 66 awards were distributed for the year 2016-17 during the ceremony.

Speaking on the occasion,Textiles Ministersaid that export awards always inspire the artisans to make better quality products and encourage others to make greater efforts so that they may win the award the following year. She further said that this healthy competition keeps the momentum going not only for the individual but also paves the way for the country to earn foreign exchange therebycreating a brand image of millions of artisans and craftpersons engaged in making world class products across different craft clusters in the country.

The Textiles Minister applauded the performance of theExport Promotion Council for Handicrafts (EPCH) for being the best in the business and doing excellent work since its inception in every field whether it is setting up of infrastructure facilities in craft clusters, creating brand image of handcrafted products worldwide and helping exporters in innovating new designs and styles. She also appreciated EPCH for starting a diploma course for the children of the artisans working in the handicraft sector and urged EPCH to start an award scheme for those exporters who help the artisans in need and also contribute to theirupliftment. The Minister thanked the EPCH for itsefforts incontributingtowards the education of girls of leprosy affected families.