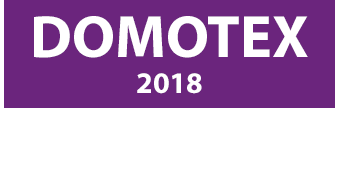 BRIEF OF DOMOTEX 2018 :   The 30th Edition of Domotex Intl. Trade Fair, the world’s leading Trade Fair for Carpets and other Floor coverings organized by Deutsche Messe AG, was held from 12th to 15th January 2018 at Messe Exhibition Center, Hannover (Germany) in the total net exhibition space of 10600 sq.m. covering 11 halls. The mega event has been proved to be aunique market place for all type of carpets and floor coverings. There were 1615 exhibitors from more than 60 countries took part this year, including 383 from India.  Out of  total  383 Indian companies, 208 participated under the banner of Carpet Export Promotion Council (CEPC), 10 under Handloom Export Promotion Council (HEPC),   3 under National Jute Board and rest of the companies participated individually. About 39,000 visitors attended Domotex 2018 from more than 87 countries.

As per the report from the Organizers around 70 per cent of visitors were from abroad, with the majority (43 percent) coming from EU countries.  There was a considerable increase in visitors from the Near and Middle East (up 9%) as well as East and Central Asia (up 16%). The positive sign was that more visitors came from the United States and the United Kingdom. As in the previous years, the Indian Carpet and Floor covering industry had  an impressive presence in Domotex 2018.  CEPC organized larger participation of 211 exhibitors from various regions from India in Domotex 2018 in Hall No.3 & 4. CEPC provided built up booths to the participants, free tea/coffee water to the visitors during the fair and provide security services to all the exhibitors  during the fair.

The world’s fines designer carpets and rugs have been awarded prizes at the 2018 Carpet Design Awards, held at Domotex in Hannover. The Award ceremony took place on 13th January for eight categories. The winners were picked up from a list of 24 finalists selected from an initial 265 Products  entries from 16 countries. This marks the twelfth successive year that DOMOTEX has hosted the top international award for modern hand-made carpets and rugs. One  Indian exhibitor M/s. Choudhary Exports Jaipur awarded for Best Transitional Design  :

INTERACTION MEETING WITH THE ORGANISERS :

Shri Sohan Kumar Jha, Sr. Director, o/o the  D.C (Handicraft ) & Mr. Rajesh Kumar Sahu, ADC O/o the) DC(Handloom) had a meeting with Dr. Andreas Gruchow, CEO of DOMOTEX Fair and Member of the Managing Board of Deutsche Messe AG.on 15.01.2018  where Mr. Mahavir Pratap Sharma, Chairman, Mr. S.N. Singh , 1st  Vice-Chairman of CEPC  were also  present. During the meeting, Chairman  thanked Deutsche Messe for extending assistance to Indian exhibitors in DOMOTEX &  it was stressed more help from the Deutsche Messe with regard to retaining Hall no. 3 and other facilities such as security cameras & free water for the exhibitors.  Dr. Gruchow informed that the Domotex Fair plan for the next year will redesigned and  assured that the Indian exhibitors will be provided  Hall No. 3 preferable location in the next Domotex Fair & they will also consider other suggestion made during the meeting.

BUSINESS GENERATED :   It is expected that the Domotex 2018 will generate a total business of more than Rs.80 Crores in addition to 3570 enquiries.

CONCLUSION  : There has been an overwhelming response at the India Pavilion of  Domotex-2018, Hannover, Germany. Buyers from all over the world visited the booths of Indian Exhibitors with much pleasure and delight. They liked  the Indian Handmade Carpets and Rugs. International buyers are accepting this fact that Indian Carpet industry has proved itself time and again and has given the world what it wanted.

After some slow paced trend in last two years the International Carpet Industry has picked up and the rush at the event confirm new energy and positivity in the business. Indian exporters are also of the opinion that this response will bring the confidence back and will be beneficial to the Indian Handmade Carpet sector.

Everyone feels that if efforts are made in the direction of promoting the Indian handmade Rugs to the end level consumers then the demand will be ever more and India will remain world leader in Handmade Carpets with no near second. CEPC has taken the steps in this direction and has started the Online and Offline media campaign to promote the Indian Handmade Carpets.