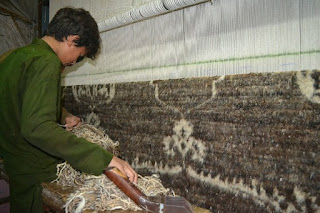 The repatriation of refugees to Afghanistan has adversely affected the carpet industry as carpet weavers wind up businesses in Pakistan, leaving both local and Afghan carpet traders in fear that the industry may collapse due to a lack of skilled workers.
Tight border controls and a crackdown on undocumented Afghans in the wake of the 2014 attack on Army Public School in Peshawar have forced many refugees to leave Pakistan and move back to the war-torn neighbouring country. Those returning include businessmen and traders, many of whom are in the centuries-old art of carpet weaving.
When the Soviet Union invaded Afghanistan in the 80s, a large number of carpet manufacturers and traders migrated to Pakistan and established the Afghan carpet industry in Peshawar and other parts of Khyber-Pakhtunkhwa (K-P).

More than 70% of carpet weavers in K-P are from Afghanistan and their skillful work has earned the province global fame for its rugs.
One of these weavers is 70-year-old Syed Hazrat, who arrived in Pakistan after the Soviet-Afghan war. He wove carpets in Afghanistan, as this was his sole mode of income,  and continued to do so after moving to Pakistan. He passed on his skills to his children who now take part in the family business from home. He acknowledges that the carpet industry in K-P is declining because skilled Afghan workers have been leaving and locals don’t take interest in learning the art.
Thirty-year-sold Abuzar Ali, who is from Hajizo refugee camp in Charsadda, weaves carpets with the help of his brothers and sisters. He says a single rug is weaved in about three to four months and is sold for Rs 40,000 to 50,000.
“My family has been associated with the carpet industry for last 33 years. We have no intention of leaving if the government allows us to stay and provides basic facilities. Our craft is beneficial to Pakistan, though many weavers have already left,” Ali shares.
Pakistani carpet exporter and trader Asghar Khan says carpet weaving is a part of Afghan culture, which has contributed significantly to Pakistan’s economy. “Pakistan was leading the global carpet industry in the 1990s and Peshawar has been a centre of trade for last three decades; our national treasury will definitely suffer a great loss because of this decline,” he says.
Elaborating on the impact, Khan says he alone sent 123 shipments of carpet and paid Rs200, 000 in taxes in 2013 but this year, the shipments dropped to only eight and he paid around Rs50,000 in taxes.
“Hand-woven carpets are popular not only in Pakistan but throughout the world and with the decline in the industry, employment of thousands of workers is at risk,” Khan says.
Another local trader and exporter of Afghan carpets, Fazal Hayat says Afghan rugs are unique in design, colour and technique. What was once considered a domestic industry in Afghan refugee camps, he adds, is now coming to an end with the repatriation of Afghan refugees.
“In the past, the carpet business suffered because of terrorism as fewer foreigners came to K-P to purchase Afghan carpets and now we will suffer further due to loss of Afghan craftsmen,” Hayat fears.
UN launches $550 million Afghan aid appeal
The trader says around 5,000 Afghan families were weaving high-quality carpets in refugee camps situated in Peshawar, Mardan, Swabi, Charsadda and Kohat districts of K-P. “The carpet production has now dropped to roughly 5%, with many workers being paid less than their usual rates,” he says.
For the development of carpet industry in K-P, Hayat has established skill centres in Peshawar where more than 100 students are being trained in carpet weaving. “The carpet industry is crucial for improving our national economy. We have manpower in the province but the provincial government does not make proper use of it. The government should establish skill centres of carpet weaving; this way we will be able to produce skilled workers and once again enhance the provincial carpet industry,” he adds.
-repoert THE EXPRESS TRIBUNE > PAKISTAN
Abdur Razzaq is a Peshawar-based radio and print journalist. He tweets @TheAbdurRazzaq
Previous: Afghanistan’s Carpet Industry and Its Challenges
Next: The Greenwashing of Carpet Waste Management