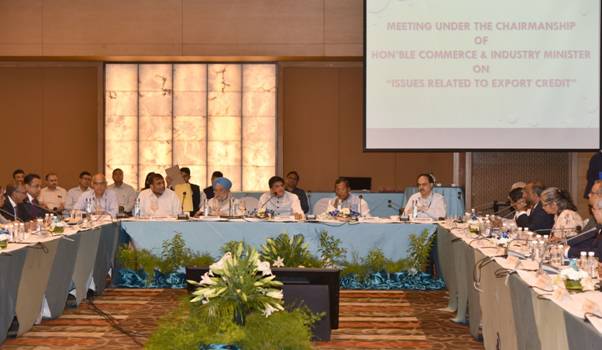 Timely and efficient availability of export credit is critical for any trade activity and is one of the key drivers that boosts growth of export. This was stated by Commerce Minister in his opening address. The time has come when we should move away from subsidies to easy availability of cheaper credit to exporters, the Minister said.

Piyush Goyal informed that in the last few years the share of export credit has come down and this is a cause of concernspecially for the MSME sector that suffers due to demand of collateral from lending institutions.

Commerce Minister informed that today’s meeting with stakeholders has been called to address this significant challenge and to redress the situation based on the inputs given by participating organizations and institutions.

Commerce Minister further said that in order to alleviate the burden on exporters and to make Indian exports competitive and on par with global best practices we have to first develop a framework with a stable policy that is internationally acceptable, consistent and robust and then look for solutions within that framework based on trust, integrity and due diligence. Greater transparency has to be brought into the work being done by Government organizations, export promotion councils and financial institutions.

The Minister informed that transparency will ensure that the genuine competitive advantages of India’s exports may be harnessed. The Minister hoped that outcomes of today’s meeting with all stakeholderswill not only provide a vision for the export sector but will also give a road map for implementation and action by Government departments and financial institutions. Piyush Goyal also hoped that the result of this meeting will lead to export credit tripling in the next five years and allow India to be on par with the rest of the world where credit is cheaper and interest rates are lower.