OBEETEE, the carpet maker, unveils its first ever India-inspired rugs collection made in collaboration with veteran designer Tarun Tahiliani

Carpet maker OBEETEE on Friday launched its latest collection of handmade rugs in collaboration with veteran fashion designer Tarun Tahiliani. Titled ‘Proud to be Indian’, the collection is aimed at showcasing quintessential Indian designs to the global audience.
“This is the first time a serious collection of rugs is coming out that is designed and conceived entirely in India by Indians. The collection is quintessentially Indian and very contemporary from the design point of view,” said Tahiliani over the phone.
The collection is soon going to be launched worldwide, starting with the US next month, he said.
And while Tahiliani has designed the brand’s maiden India-inspired collection, OBEETEE has also brought on board other designers such as Raghavendra Rathore and Abraham & Thakore.
OBEETEE makes carpets that sell for 50 cents to $50 per square foot and has delivered some of them to the Rashtrapati Bhawan as well as the Buckingham Palace. One of its rugs at the Rashtrapati Bhawan, among the biggest created by the firm, measures 452 square metres and consists of “billions of intricate knots”. Yet, OBEETEE (the name is the combination of the surnames of the founders), one of India’s largest handmade rugmakers with almost 100 years of history is largely undermarketed and lesser known in India. Exports account for OBEETEE’s sales almost entirely.
Tahiliani said: “I barely knew about the company before I started working with them.
Workers at OBEETEE’s Mirzapur factory.
“It’s a result of circumstances,” chairman Rudra Chatterjee explained over email. “OBEETEE used to focus exclusively on the British market in the past, because of our shareholders, and then towards the middle of 20th century we started focusing on other European and American markets. Since 1990, the focus was mostly on the US market.”
One reason behind that export mindset could be that demand for Indian carpets in the West has been really good over centuries. “Also, the demands for woolen carpets have traditionally been much larger in colder countries,” said Chatterjee. “But the domestic demand is also evolving, I think there is lot more interest in carpets within the country today.”
Tahiliani started working with the brand in 2013. “I went through OBEETEE’s archives and made the designs. The techniques are all OBEETEE’s,” he said.
The framework of the new collection is based upon three distinct design structures—the antique frames collection, the chikankari collection, and the abstract art collection.
Antique frames collection is based on the borders painted in the most elaborate refinement, on the periphery of most Mughal miniature paintings. Each rug is finished with a distressed look to reflect the patina of that era.
“I love the colours on the borders on miniature paintings. The frames are beautiful and colours subtle,” said Tahiliani. “I also like the back of the carpets more than the front. So I wanted my carpets to have that distressed look.”
The second segment is based on chikankari, a Tahiliani trademark.
There were many firsts for OBEETEE too. Classic Indian motifs such as Kairi bootis and stylized floral patterns like lotus and rose have been used to add details. For the first time fine zari threads were woven into these rugs to render an unimaginable metallic lustre.
In India, OBEETEE’s sales are mostly to hotel chains such as Oberoi, from two points of sales—Jagdish Store and Taj Khazana, a luxury lifestyle store at the Taj Mahal hotel, both in Delhi. Globally, the brand works with departmental stores such as ABC Carpet and Home in New York and HD Buttercups in Los Angeles, furniture stores and hotel groups such as Four Seasons.
Rugs from the latest collection are priced between Rs5 lakh and Rs12 lakh and will sell from the brand’s boutique at Taj Khazana and Tahiliani’s store in Mehrauli.
There are several factors that make OBEETEE tick in the global market, according to Chatterjee. Evolving designs, new looks and colours, the choice and the texture of the fabric are some of them. There are three things, according to Chatterjee, that makes the rugs unique—designs, the process innovations and craftsmen.

Carpets are being washed at OBEETEE’s Mirzapur factory.
“Our carpets blend traditional carpet-making skills with modern computer techniques to create masterpieces that are Persian in genesis, Indian in essence and international in appeal,” said Chatterjee. “These carpets have as many as 400 knots per square inch. So a 9×12 foot carpet comes to you with nearly 6.22 million knots.” One weaver ties about 6,000-10,000 knots in one day.
OBEETEE is also one of the biggest producers of hand-tufted carpets, which are less labour-intensive and quicker to make than their knotted cousins.
Sustainability and social accountability, issues that are generating debates across the world of fashion and design, are key focus areas for OBEETEE.
“Working with them, I realized that OBEETEE is a very professional company with solid principles of design, equality and long-term view of things,” said Tahiliani. “Long before CSR became fashionable, OBEETEE was actually doing it. They have a very strong company culture.”
“OBEETEE’s power systems run on gas derived from biomass and the water used in dyeing is recycled. Last year, the Women Weavers, a training programme on rug weaving, was launched to empower women and give them a viable, long-term employment opportunity,” said Chatterjee. “OBEETEE also supports children’s education and the minimum age for employment at the brand is 16, a policy that is strictly enforced.”

OBEETEE was founded in 1920 by three Englishmen—F.H. Oakley, F.H. Bowden and J.A.L. Taylor—in Mirzapur, Uttar Pradesh. Today, it has 650 permanent employees and works with 15,000 independent artisans, some of the families have been associated with OBEETEE for several generations now, in seven districts around Mirzapur. Situated on the Grand Trunk Road between Varanasi and Allahabad on the banks of the Ganga, Mirzapur is also known as the heart of carpet making in India. Artisans here have been weaving a global reputation in carpet making for centuries now. The wool is sourced from Rajasthan, Ghazni in Afghanistan and New Zealand.
Women workers at OBEETEE’s Mirzapur factory.
The brand sells through its New York Office and has representatives in Germany and the UK.
OBEETEE rugs have always been well-made. The focus in the future is to use that base as a launching pad and initiate more collaborations.
“We plan to do many more collaborations with different designers around the world,” said Chatterjee, “who can resonate with our philosophy and tell a story that they feel suits the carpet.”
“We are looking at opening stores in India,” said Chatterjee. “There is no good reason why we haven’t done it yet. But we need to find the place and an environment that fits the OBEETEE culture. We will only open our stores in India once we find something that fits our needs.” 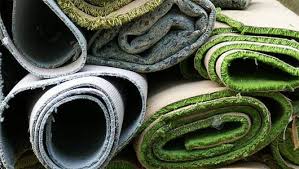 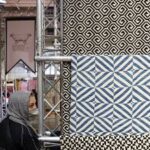