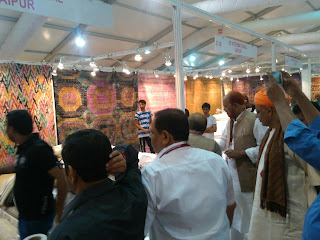 Jan 1, 2017- Earnings from Nepal’s top export, hand-knotted woollen carpets, fell 6.6 percent in the first five months of the fiscal year, as production shrank during the period following a devastating earthquake and trade blockade by India.
Shipments between mid-July and mid-December 2016 were valued at Rs3.2 billion compared to Rs3.5 billion during the same period of the previous year.
“Export revenues fell because of the twin disasters of an earthquake and blockade,” said Chhiring Sherpa, president of the Central Carpet Industries Association.
Surprisingly, Nepal’s carpet exports had swelled 16.8 percent during the same period of the last fiscal year despite the trade blockade which crippled the country’s transportation system and disrupted raw material imports.
“We were able to export carpets during the blockade because we had adequate stocks to fulfil orders from foreign customers,” said Sherpa. “Also, we were
able to beat the blockade because our consignments were dispatched by air.”
International buyers generally provide up to six months for domestic suppliers to ship their products. This means that the carpets that are produced are not immediately exported. As a result, disruptions in production do not have an immediate effect.
“This is the reason why the problem of labour shortages seen during the devastating earthquakes of April and May 2015
was not reflected on trade data published by government agencies at that time. But the impact of the problems then is now becoming visible,” said Sherpa.  However, this is not the only problem that has hit earnings of carpet exporters.
“A weaker euro and pound sterling has eroded the purchasing capacity of people in the European market, as our products have become expensive there,” said Nawang Chime Lama, proprietor of Nepal Rug Company.
Germany and the UK account for a huge chunk of Nepal’s carpet exports. Other major markets for Nepali carpets are the US, Australia and China.
Sherpa said that export prospects for Nepali carpets were better as factories are now getting a steady supply of electricity, the Nepali rupee has weakened vis-a-vis the US dollar making Nepali exports more competitive and labour relations have improved.
“If we wait for a year, our exports will definitely start to grow. So, there is room to be upbeat,” Sherpa said.
news by http://kathmandupost.ekantipur.com
Previous: Iran says channel to export carpets to US open
Next: On a date with data-mining